Everything You Need to Know About Baby Boomers 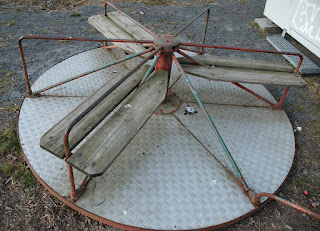 Everything You Need to Know About Baby Boomers
by Susan B

Everything you need to know about baby boomers is summed up by the picture above.  This is a piece of actual playground equipment that was present in nearly all playgrounds during the years when baby boomers were kids.  Kids sat on the benches while other kids held the railings and ran around in circles to get the ride going fast.  If you fell off, you were going to crack your head or break some bones, so the danger was real.

You could squeal about being dizzy, but that did not matter and no one was going to stop the ride for you to get off.  You were dizzy and no one cared about your complaints and you better hold on or you were going to be flung off the ride like a projectile onto the ragged concrete.  In fact, if you cried about being dizzy or about losing your grip, the big kids would probably run faster and make the thing spin harder and harder. Every playground had big, mean, older boys who commandeered the playground equipment, intentionally making it a challenge for the timid or weak.  There would be a daredevil or two who would hop up and balance atop the handrails to prove they could endure that risk, while laughing at everyone else having trouble merely sitting on the seats.

Another version of the same ride had no platform -- just benches and an open bottom.  If you fell off that, you were going to crack your skull and get hit repeatedly by the benches as they twirled around.

Now, how often did these dastardly "accidents" occur? Rarely, and when an accident did happen, it became the stuff of legend and gossip that spread and lived on for many years.  "Hold on tight.  You don't want to end out brain-damaged with a giant melon head like Jimmy Shnitzley.  Yeah, well, he got that from falling off this very ride."  Parents of Boomers never denied them the opportunity to get their skulls scraped open on asphalt -- they simply issued warnings of the end result.

Playgrounds in the Boomer days also had swings made of thick wooden slabs. If a kid walked in front of the swings, because the kid "forgot" or "wasn't paying attention," that child would get mowed down by another child's legs and then whacked in the head with a solid block of wood.  That would teach them what happens to those whose attention wanders off.

Back in the olden days, it never occurred to anyone that playgrounds should be safe.  The idea of using wood chips or rubber mats as a soft surface never entered anyone's minds till the mid-1970s.  And that, of course, led to the downfall of mankind and all the problems we have today with kids growing up all fragile and frightened and allergic to gluten.

Back in the olden days, playgrounds were practice for the real world, and the real world was not safe.  It was jump on and hang tight, or fall off and be scraped bloody.  And this is how Baby Boomers ended out how they are - self-reliant, cautious, skeptical, and with strong hand grip muscles.  If a Boomer is holding on to something, you could never take it from their hands, because they were trained young to hold on tight.

Some of my other writing: